At the point in time that this photo was taken, I should have been somewhere over the Congo, maybe Zambia. This, however, is definitely not the interior of Africa. Having got up at 4am, by 6am I and a few dozen other people were sitting on a plane at Manchester Airport waiting to depart, only then the powers-that-be decided that due to a few snowflakes falling, nothing could move. Time passed, and by 9am we were all back in Terminal 2, the MAN – AMS leg of my journey wiped from existence. (Other excessive flight delays to have featured on here: Bergen, Nov. 2012; Keflavik, Jul.2019 [still the epitome].)

I finally left the ground about two and a half hours after capturing this shot. I will still make my final destination, and already know that a completely unexpected new country is going to make the blog tomorrow, perhaps that can be seen as a minor compensation. At least I won’t be seeing any more snow for a couple of weeks, that’s guaranteed.

Flying reduces one to a platelet in a bloodstream, being pushed through a number of tin pipes and artificially-lit domains, with little sense of the outside world passing, particularly on a night flight at this time of year. I left Salatiga just after taking yesterday’s shot, so about 11.30am Indonesian time on Friday, and this shot depicts my arrival in Manchester on Saturday morning, having seen only darkness for about 18 hours since leaving Jakarta. The journey went well, though…. at least until I got to Manchester Victoria and Northern Rail took over. But that’s another (unending) story.

Back home. Such a grey and rainy day today, a total contrast with the last two days in Greece. So dull that I did not feel moved to take a picture at all between waking and sleeping: but I did get this one in the early hours as I waited for my taxi driver to get his parking token. Cars are intrinsically dull too, but that makes it representative. 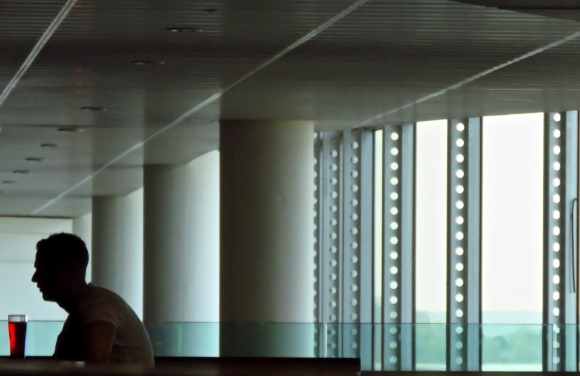 The departure lounge is a kind of limbo state. You’ve sort of left the country, the real world, behind, but you’re not yet at your final destination or even properly travelling yet. Time stops behaving as it does out there. A beer at 8.20 on a Sunday morning is quite tolerated. But there’s nothing really to do: the system may as well suck some more money out of you while you wait. I would like to see libraries, cinemas and gyms in departure lounges. But I doubt it’ll ever happen.

Off I go again, to a country I have visited once before, though the city will be new to me. Where? Well, you can find out tomorrow. Look up from the Grain Loft bar in Terminal 1 of MAN and one will see the abstract view shown here, it’s not about travelling, it’s just a combination of shapes that I find interesting. It wasn’t an exciting flight… 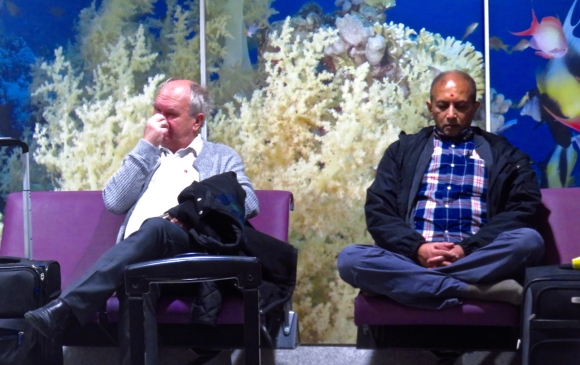 I do like this picture, or I wouldn’t have chosen it — I always like the juxtaposition of so many random people in airports, and wonder where the yogi is off to (beyond just the answer ‘Amsterdam’, which is where the 05:55 KLM flight goes to, always the first flight to leave Manchester on any given day). The aquatic mural behind them is an added bonus.

But the main reason I chose it today is that finally, after five years and four and a half months of doing this blog, it means I’ve plugged the last gap in the hour-by-hour coverage of the day: this is the first photo to get in between 5:00 – 5:59 am. A bloody early morning in other words, I was up at 3am. Where was I heading? Well, if you don’t already know, you can find out tomorrow.

In the first 1,520 days of the blog, that is, up until my return from Estonia last October, 341 of the pictures were taken outside the UK, around 22.5% of them. However, in the 196 days since, only five of them have been (on my trip to Norway in January). Whether this marks a sustained change in my travel habits is hard to say, for various reasons there probably will be fewer trips coming up but it is impossible to say for sure. Anyway — off today — as to where, you can find out tomorrow. At least it wasn’t a very early start, though this doesn’t seem to have made any difference to the guy stretched out on the seats. 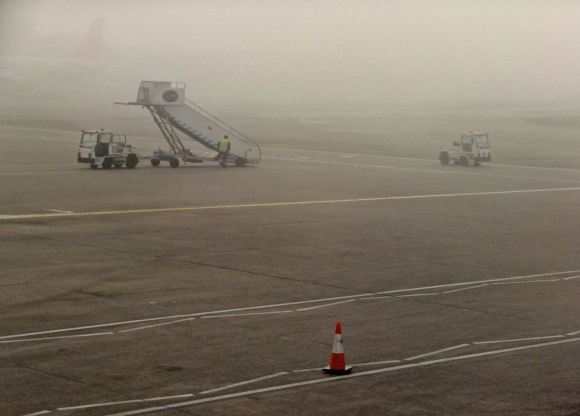 I don’t feel my photos on here have been that great lately, and one reason has been a decided lack of light. Except for last Tuesday (10th), which wasn’t bad, we pretty much haven’t seen the sun in March. Cold, grey, flat light throughout. This morning was little different. The fog was clearing as I boarded my plane to Bergen, via Copenhagen — the usual Long Commute — earlier flights this morning were disrupted by it but though I had a short delay it wasn’t so bad. I doubt the weather will change much in Bergen however, which is after all The City of Perpetual Rain, so no immediate prospect of a change to sunnier scenes…

I’m travelling again. In fact I still have at least four, and possibly five, separate trips abroad to make before November is finished — so much for my green credentials. I’m flying out of Manchester on three consecutive Sundays, starting today. So this will become a familiar scene. 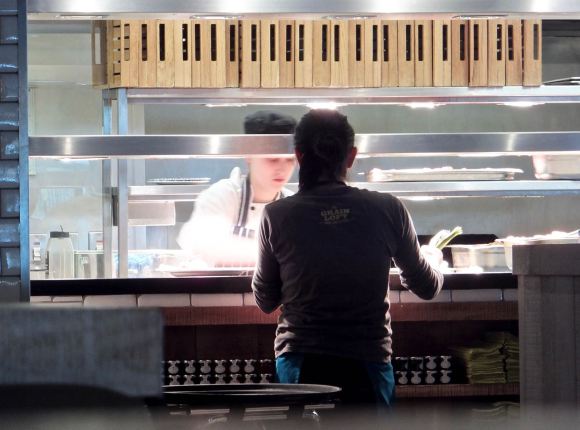 I’m travelling again; rest of this week I’m working in Norway. But because it’s Bergen (the City of Perpetual Rain) it was throwing it down on arrival, so here’s one from the journey. Rim-light is always worth trying to capture but my attention was also caught by the crates at the top which looked to my eye like a piano keyboard.