Incompetence (not even peaked)

Our last day in Iceland was supposed to end around, oh, say 9am? And we were due home in Hebden Bridge by 2pm.

As you can see from this, this didn’t happen. In fact, we did not leave the airport until 9.30pm, after a litany of farce that I do not wish to begin to recount. Thus, another two hours after this take-off time was promised to us.

You can’t completely see the flight number to identify the budget carrier who inflicted this joke upon us (with no informational updates); let me just say they wear orange. A shame because otherwise this has been an excellent week in Iceland, if you get to visit it I highly recommend it.

Our last lunch of the week in Iceland was had beside the waterfront in Akureyri. We were being watched…

Tourists at the Gates of Hell

Astonishing vistas throughout our road trip today, to the east of Akureyri. Could have chosen any one of a dozen shots of the active volcanic region around the lake of Myvatn and the lava fields of Krafla. This one of Clare and Joe at the mudpools of Hverir wins though — because of the sexy curves of the hills behind, and because of their seemingly casual attitude towards wandering around a place that is as near as I’ve ever experienced to what it must be like in Mordor, or the Gates of Hell. This is, I guess, what I came to Iceland to see; something that surely doesn’t exist in many other parts of the world, and certainly not in Europe.

On the road north of Dalvik

Reykjavik was fun and — after the first 30 hours or so — sunny and quite warm, but what we saw there could, to be honest, have been seen anywhere. Time to get out in the wilds. This morning we flew to Akureyri in the north of Iceland, picked up a car and headed further north still, and on the road between Dalvik and Ólafsfjör∂ur, there came this scene. I tried hard to get all four things in the viewfinder — the sheep, the island of Hrisey to top left, the mountain, the waterfall; although one result is that this almost looks like I’ve taken the halves of two photos and mashed them together. But I still like it. This is what was hoped for…. Now all that is needed is some volcanic activity. But that stereotype can be sought out tomorrow.

I’ll tell you what though — of all the pictures I have taken in July, whether they appeared on this blog or not, this is definitely the coldest. I would say it was about 5ºC at this point and virtually sleeting. The sheep must be used to it, I guess: they look contented enough.

Joe and the glaciers

As it says on the relevant website: “The exhibition gives visitors the chance to delve into the collections of six different cultural institutions: from thousand-year-old treasures to the latest in Icelandic art. Its focus is on the visual expression of the ideas we have about the world, our environment and ourselves. The materials and techniques may change over the years, but the viewpoints remain the same.”

So other people’s art again; here, 42 (yes!) photographs of Icelandic glaciers, with Joe to give some perspective. He said he liked the place too….

View of Esjan, from Reykjavik harbour

The photography in Iceland up to today had been unspectacular but that’s because the sun hadn’t been shining. Today… it was. This is Esjan, or Mount Esja, seen from Reykjavik across the fjord. The green pimple? No idea, but it’s cute. 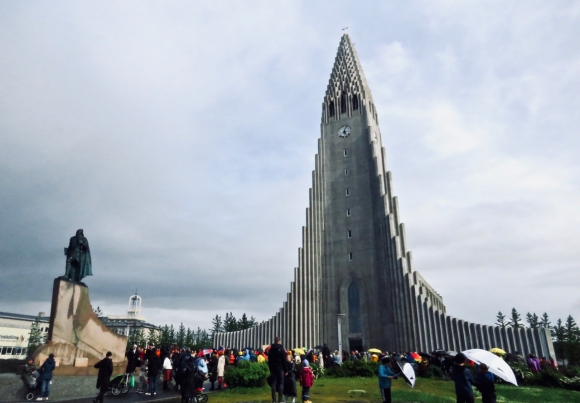 The Hallgrimskirkja is Reykjavik’s most distinctive architectural landmark. The design is meant to reflect basalt columns and thus the country’s volcanic geology. The statue in front is of Leif Eiriksson, who got to America several centuries before Columbus; it was presented by the USA to Iceland in 1930 and today seemed to be the focus of a 4th July gathering as a result, although maybe it was just a big bunch of tourists celebrating the fact that after 36 hours of rain since we arrived yesterday morning, the sun finally put in an appearance. Let’s hope it stays….

The Museum of Icelandic Punk, Reykjavik

Time for a summer holiday. Time for the blog’s 36th country: Iceland. Time for tiny but endearing museums devoted to the Icelandic punk rock scene from the 1970s on, built in old subterranean public toilets. The fabled landscape of Iceland? I’ll capture this if it stops raining. It’s forecast to: eventually.