This is why it’s called Iceland

I have never seen snow falling anywhere as early in a year as 17th October, but Iceland lived up to its name this morning and duly delivered, as my first flight home returned me to Keflavik. This seems even to have caught Icelanders unaware, seeing as it caused my second flight to be delayed two hours while we waited, seemingly endlessly, for the wings of our aircraft to be de-iced (“Ladies and Gentlemen, this is your pilot speaking…. We are eighth in the queue for de-icing…. [45 minutes later] We are sixth in the queue….”). But I did get home in the end.

I wouldn’t call this winter harsh, but it has been cold, at least by local standards. Yes, I’m sure those of you who live in places like Montana or Trondheim would laugh at our definition of real winter, but hey, that’s a maritime, Gulf Stream climate for you.

And the creature? Well, a face perhaps. It’s certainly got two eyes, and a pendulous, possibly melting face.

Easter. A time to celebrate spring, a time of renewal and growth. A day for another few tons of grey slush to barrel out of the sky and drench and depress us all. This should be a tennis court in the park. Instead it’s a sea of crud that doesn’t even have the decency to be solid, at least then we could build a snowman.

On Storsteinen (The Big Rock) 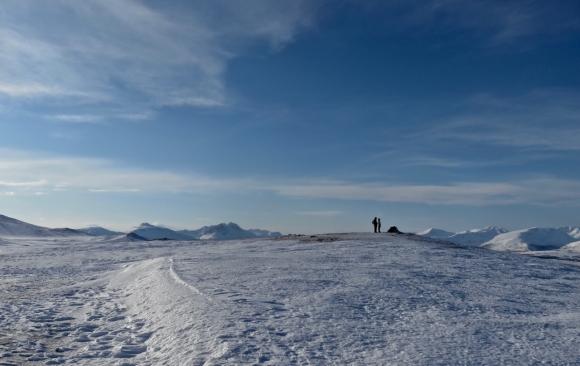 Storsteinen is the name of a 421-meter (1381 feet) summit not far outside Tromsø city centre and reachable by the Fjellheisen cable car. As far as my primitive Norwegian can establish, its name just means The Big Rock. Certainly a fine place for an excursion to pass the time on my last full day here on this particular trip — though I’m due back in about seven weeks.

Even including the picture taken on the summit of Kilimanjaro, and the ones in Moscow in January 2017, I nominate this the coldest of all the 2,386 pictures thus far. According to information on the Fjellheisen web site, it was -13ºC up there today. And I can assure you all that it felt like it. 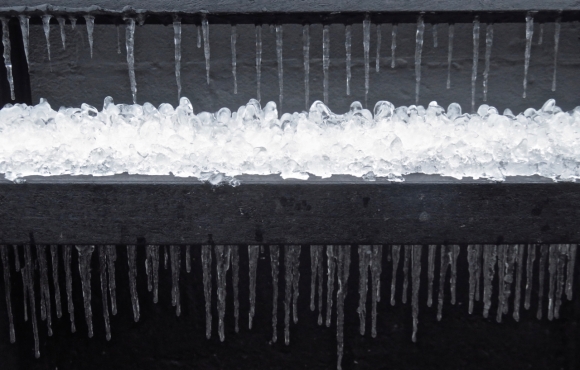 I did make it into Manchester today, and home again — unlike those stuck on the M62 last night. My train to work passed over the gridlock on the motorway somewhere around Castleton. At home in the evening there were vague signs of a thaw but as one can see from this shot, it is putative at best. At least I’m getting out of here on Sunday. To the Arctic.

Clare would like to take some credit for this photo as she claims ‘she saw it first’. Consider it inspiration then…

Don’t worry, Manchester has not made a sudden return to the depths of winter. In fact this is the Christmas ice rink being callously disposed of. That’s your festive fun over for another year, sod off back to work the lot of you. Then again this was the establishment that was publicly playing Wizzard’s I Wish It Could Be Christmas Every Day as early as November 8th this year, so I have no sympathy. Doubtless it’ll be back in ten months. 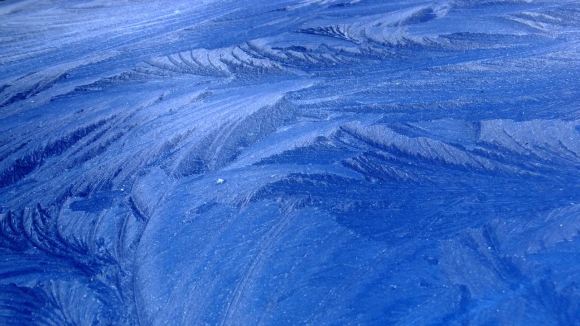 As had grown on a car bonnet (hood) today — and note the time. This was the coldest day of 2014 I think.

Mind you I still haven’t actually touched snow since 21st January 2013, immediately prior to my trip to Australia. Saw it at a distance on 4th February this year, but only that one time, and it’s not been underfoot again yet.

I’ve only ever seen this a couple of times before — a rainbow, or at least a spectrum, high in the air, nowhere near the ground and with no rain in sight. I guess it must be caused by light refracting through ice crystals in the upper atmosphere. Bad weather on the way perhaps. Let’s hope not: I intend to spend next weekend walking in Norway.

POSTSCRIPT: Have discovered this is something called a ‘circumzenithal arc’. They are not rare as such, but apparently only appear when the sun is at exactly the right angle to ice crystals in high-level clouds, and thus can be seen only in very restricted locations on the ground. So if you do see one, feel privileged – it may well only be visible in a space a few metres around you. 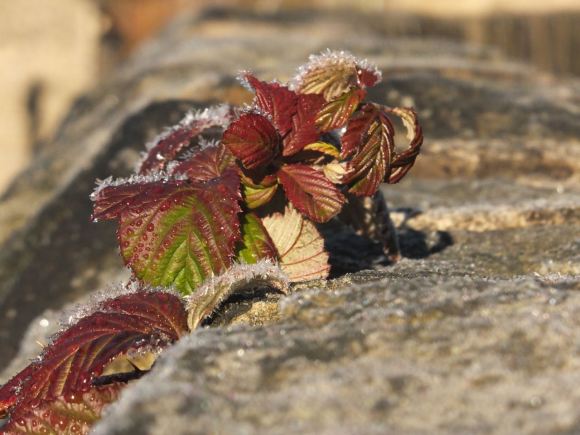 Stayed below freezing all day today, the coldest day since Moscow back in March. Beautiful weather however, a glorious winter’s day. These brambles have made a break for freedom above a stone wall up the road from our house.

The forecasts have been promising a snowy turn to the weather for a while and today it duly arrived – although it was hardly The Day After Tomorrow. This did not, of course, prevent most of Britain’s infrastructure clogging up as we all fretted about the place, and councils and national government blamed each other for there not being enough gritters. But it’s the same every year.

This bird is apparently a Muscovy duck: not indigenous to the UK (a fuller shot of it is here). Either it’s stopped over for a busman’s holiday, or it’s an escaped pet. I have been told the eggs are very tasty. They’d keep well if laid outside in this weather, too.