The first of the drives (mentioned yesterday) is completed. This was a somewhat gloomy day with occasional bursts of light, as the shot suggests. The tower sits on the edge of the moor, above Lancaster. One of those constructions built purely for the hell of it: it contains nothing, provides no service except the rooftop platform from which one can see the good view. So it counts as a folly, I suppose: I’m not even sure whose ‘jubilee’ it celebrates.

What small part of the world can be seen from our house, all looked like this today. With no reason to leave the house, I did not; picture opportunities were limited to using the long zoom to see what might be going on over the other side of the valley. They had their fires burning, anyway. This is also one of those shots that looks like I’ve taken it monochrome, but really have not; if anything I have beefed up the saturation a little.

Had things turned out differently I might have been in the Balkans today, but even though they did not, I am not bothered by this — which would not have been the case ten years ago. I guess I am more attuned to the enjoyment that can be had from the local area these days. Yes, even Rochdale railway station — like the rest of the region, bathed in cold but magnificent weather.

A cold day today. Of course, ‘cold’ by British standards is not cold by, say, Canadian or central European standards, but we notice it in our own way. Look, someone in Royd Terrace has even lit a fire.

A far more pleasant afternoon than has been the case recently. The sun is on its way down on 2021 in football terms, with the venue for my last match of the year — Silsden FC — doused in sunshine as everyone prepared for the game. (Not that visitors Knaresborough can have prepared very well, as Silsden won 8-1.)

I’m not trying to be overtly metaphorical here. But this shot certainly sums up today’s weather. Enough snow to feel, not enough to make a difference, all under steel-grey skies.

Back home, back to the grey and gloom of a northern December, the everyday of the train journey to Manchester (here at Littleborough). It had to happen. LIke the birds speckled across this shot, let’s just live with it.

The penultimate sunset of the year

Without even having to be subtle about it, the moronocracy have ensured not a single pub nor place of entertainment will be open for New Year’s Eve anywhere in the UK, so I don’t feel 2020 is really ending — it will go on to infect our future for years to come. It’s going out cold, too: this was probably the coldest day of the year. This view from the upper reaches of my house has appeared on the blog many times before but it’s a useful mainstay, and on this one I like the addition of the headlights of the car caught heading up Birchcliffe Road.

The Lune at Glasson (as oil painting)

Glasson, out on the Lune estuary a couple of miles from Lancaster, has featured three times on the blog now and each of these has been taken in the last week of December — indicating that it’s a nice place to come and hang out when seeing out Christmas at the in-laws. Melancholy though, in late December. There was so little light today I tried cranking up the ISO setting very high to try to compensate, and shots taken during this period ended up with this grainy, blurry look which I decided was not all that bad. Like this one, the reeds look like think brushstrokes of paint, and there’s something about the boat which resembles a painting more than a photograph. That’s my excuse anyway. 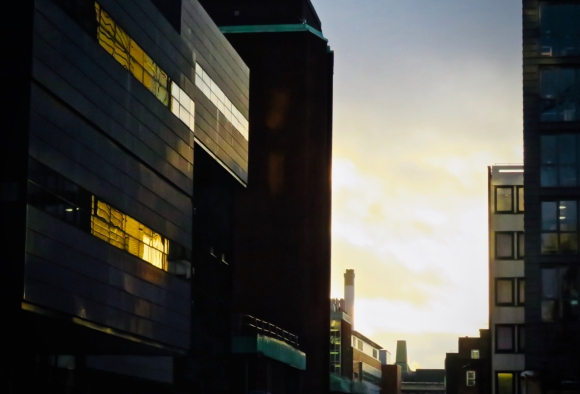 I don’t mind campus as such. But the process of getting to and from it is becoming a real trial, thanks entirely to the ineptitudes of Northern Rail over the last two years (if you haven’t had the pleasure, lucky you). So I am glad that today marked my last day there in 2019. And yes, my journey home was a screw-up.