More plantage. But it’s the season for it. There’s a shortage of vegetable oil at the moment, apparently — as Ukraine was a major supplier, but this year is not, for obvious reasons. So the more of this bright yellow stuff that we grow, the better: at least, if we want to fry our food in an adequately healthy way.

My first stop on the journey today was York, and here is its fine-looking railway station. I upload this while sat in Stansted Airport terminal along with a handful of other people, and no places of refreshment open. So there’ll be nothing more to picture today before the flight leaves just after midnight. I’ll see you in quarantine, somewhere in the South Atlantic.

In the National Railway Museum, York. Joe used to be taken here frequently when he was little, but with around two-thirds of his life having passed since the last time, he now claims no memory of the place, so as we had a couple of hours to kill in York this afternoon, it was worth the revisit. Thus, York becomes the latest location to hit double figures on the blog: 10 shots taken there now, in what is nearly 10 years.

Will he kiss her? 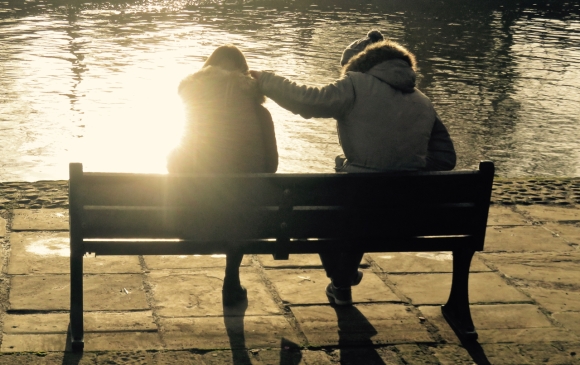 He did do so, a couple of minutes later. Yes, I do have a photo of that moment as well, but there was too much flare on it and anyway they can keep their privacy in that respect.

The seller of balloons 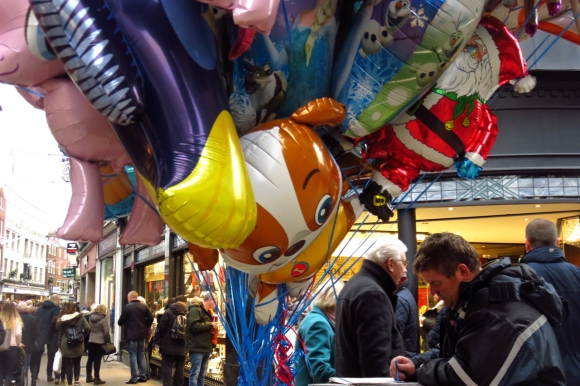 2016’s last day was an enjoyable and sociable one, but these balloons were as near as I got to what might be called a ‘party’. But either way — hope you had a good evening, and a good 2016 as well. Personally, mine’s been up and down, and there hasn’t really been a ‘big event’ (like Kilimanjaro in 2015 or Australia 2013) to inspire me behind the camera. There are possibilities emerging for 2017 though. Favourite photo of the year? Probably the proud-looking frog in our garden on 30th June, because of its willingness to pose while I maneuvered the lens two inches from its nose. Happy New Year.

This is our friend George who came to visit tonight, here we are waiting for the train back home after time in York. I like this shot because of her blue hair nearly perfectly framed in the huge roof canopy of this famous old railway station. 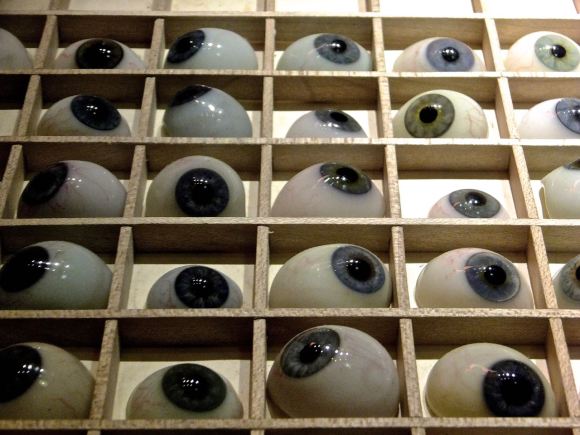 Took Joe (on school holidays) to the Castle Museum in York today, a good museum full of “everyday objects”, though I guess most people don’t have these kinds of thing lying around on a shelf at home. They appeared in the context of the World War I 100th anniversary exhibition there, a time at which replacement body parts were in more demand. 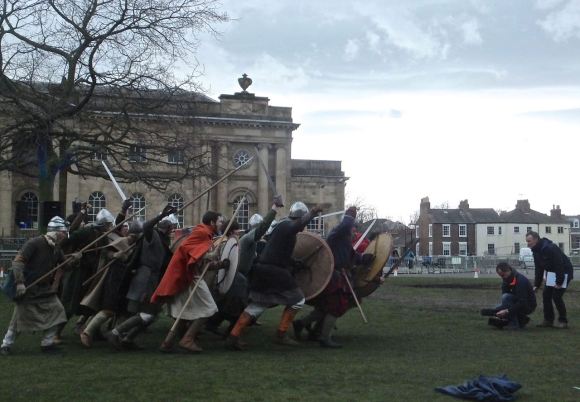 Joe and I went to York today, which is certainly the most interesting place easily reachable from my house (we have a direct train), and ranks up with Edinburgh and Oxford as one of Britain’s best and most attractive (but also busiest) cities. Today there was some kind of medievalist festival on, and these guys were going through their paces for the cameraman and director to the right. I would like there to be better light on this shot but I think it captures their movement pretty well. 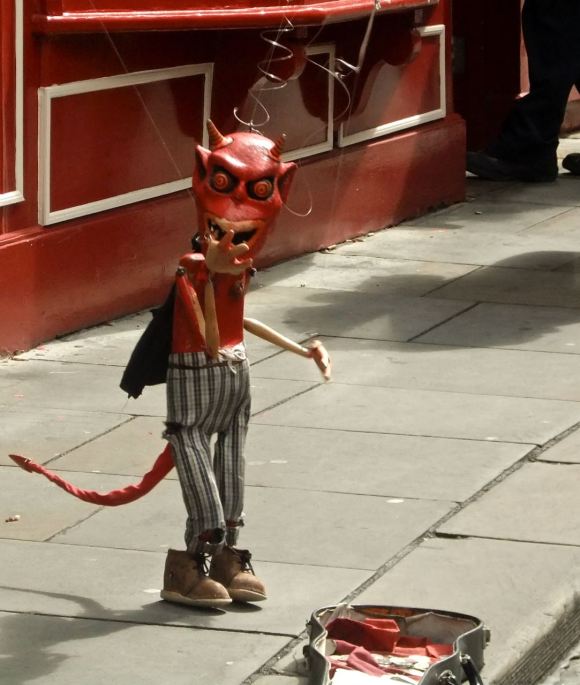 Still off work, went to York for the day – a fine city with plenty to do and see (but lots, and lots, of people in the narrow streets). Could have presented a photo of the architectural glory that is the Minster (cathedral), the Roman ruins, some of the best-preserved city walls in Europe, the National Railway Museum… but instead, let’s go with this picture of a devil puppet, attached to a busker’s fiddle so it twitched and boogied as he played. Why? Because, I don’t know, it’s cute, and had no objection to having its picture taken.