My perambulation around the southern parts of England continues. Academic that I am you might have expected Oxford — undoubtedly one of the world’s greatest seats of learning — to have featured on here over the last 11 years (nearly). Its rival Cambridge has done so, and I have to say I do find that the more attractive place of the two. Cambridge has rural charm whereas Oxford is really just a middling-sized city with, admittedly, some pretty fine buildings. But on a sunny, pleasant Monday morning, it’ll do.

I’m back in London again and here’s one of its best-known landmarks. Actually this hasn’t been called the ‘Post Office Tower’ for a very long time — these days it’s the ‘BT Tower’. But for my generation this always was the Post Office Tower and always will be. Tallest building in the UK from when it was built in 1964 until 1980. There’s still something cute about it; it reminds me of a big light bulb, for some reason.

A day working at home gained interest through getting a masterclass in roofing from these guys working on the house over the road. At the beginning of the day that roof looked like the one of no. 31 next door. Roofing’s one of those specialist talents that very few people have, but which we all need, isn’t it? And I’d take some persuading to spend a whole day on that scaffold (constructed by another professional group that we need to just trust).

This is the exterior of the Alliance Manchester Business School, built for a vast amount of money and now going completely to waste, along with the rest of the campus; monuments to a time past, now standing in a city of the dead. If you think I’m being over-dramatic, have you been to Manchester lately? Nothing has happened there since October. A sense of rot is setting in, and if you (like the publicly cheery city council) think that ‘recovery’ is all just a matter of a wave of the legislative wand, I say that’s optimistic, at best.

The fear of the Lord…

The city of Chester makes its third appearance on the blog with this rather odd piece of architecture. I like the black-and-white, but that’s a strange inscription don’t you think? And yes, the burglar alarm at the bottom does annoy me. Otherwise I think I’ve mostly got the symmetry right. 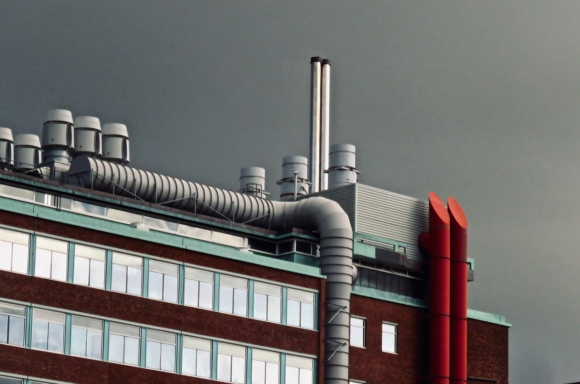 Not an exciting shot, but then again this wasn’t an exciting day, nor is it an exciting period: I can see all the photos from a 15-day run (ending on 24th January) being from Hebden Bridge or Manchester. Never mind, I have marking to do. Here, I at least like the pipes, the red against the grey.

On the outside, not one of the campus’s more attractive buildings, but it was looking OK this afternoon, and inside it’s actually quite pleasant, with lots of dark wood panelling etc. Mind you I still get lost in this building sometimes as it has a very confusing room layout, despite (or perhaps because of) hosting the schools of Planning and Architecture.

I have never noticed before taking this picture what a masterly piece of architecture the National Graphene Institute is. The crane you see in this picture is not a reflection. In fact, it stands behind the building, which is therefore translucent in its upper portion. Graphene was discovered by Andre Geim here at Manchester by how it adhered to pieces of sticky tape used to clean graphite, and look — here are those pieces, lined up, black, translucent — just like graphene. It’s brilliant, actually. 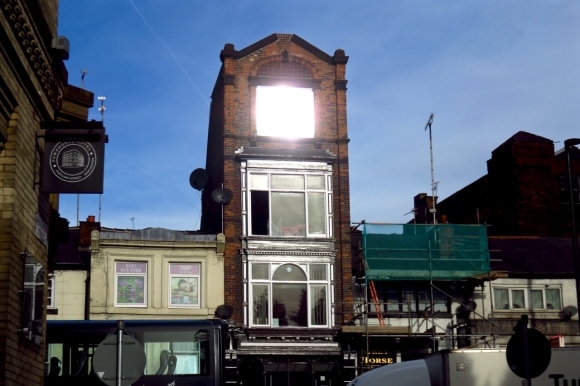 I have been meaning to put this building on the blog for a while and today it gets its chance, partly because not much else happened (I spent all day in my office, and it was a nice sunny day too), and partly because of the coincidence of the sun taking out the upper floor window. How did it end up like this? If it was built on its own, why so much taller than its neighbours? On the other hand, if it was once part of a longer terrace, how come it survived when the others were demolished and rebuilt? Someone must know….

POSTSCRIPT: See http://www.theskyliner.org/82-portland-street/ for more info. Apparently it is a newer building than its neighbours, so was deliberately built like this, but no one really knows why. Maybe the builders just had a narrow plot and decided to maximise the floor rentals they could acquire from it (like the tall houses of Hebden Bridge). Thanks to Katie Carina Homer for this link.

Manchester city centre, like all big city centres, is now substantially formed of anonymous glass buildings like these, the coating probably not doing much for the insulation, but look at the lovely reflection effect it gives. I like taking pictures of buildings though I am sure all would be better composed if I had a hundred-foot tall crane to lift me up and get the perspective right.