Manchester as in “Blade Runner” 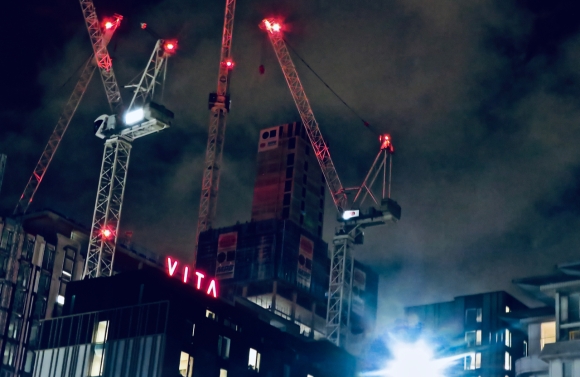 The original Blade Runner movie was set in 2019 and in Manchester’s case is currently coming to look more and more like architectural prophecy. And those quasi-human replicants that infiltrate society and create havoc? We call them “Tories”. 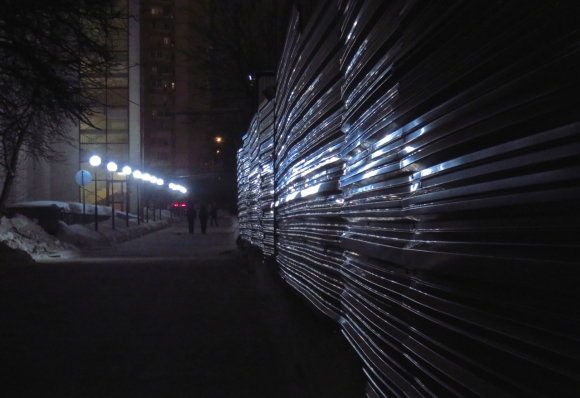 I’m still here on the campus of the Russian Academy of National Economy and Political Administration (hence, RANEPA). It was much colder today — thanks to a biting wind; the last few days had been still and not unpleasant, but today was bitter. 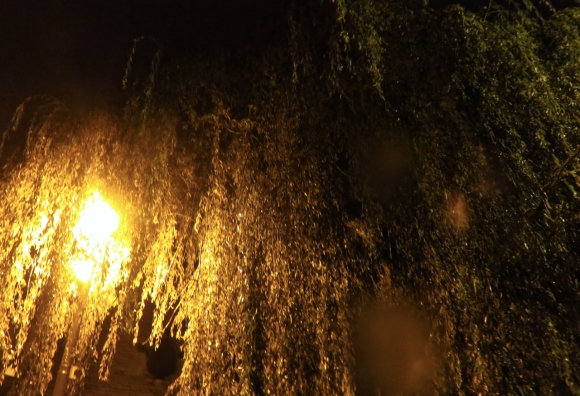 This weeping willow stands at one end of the 16th century bridge over the Hebden Water after which my home town is named (viz, Hebden Bridge). It has featured in the background or periphery of several photos before, but today I make it the prime subject, thanks to the late night street lighting and the sleet which was barrelling out of a damp grey sky on the way home (see tomorrow’s picture…). 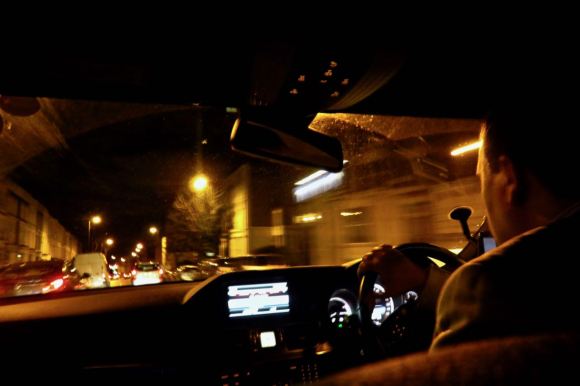 Although this is timed as very early in the morning, technically this the latest picture of all 1,598 so far — because this is still ‘Friday night’. Hey, it was a good evening… but you don’t get to see any pictures of it I’m afraid. 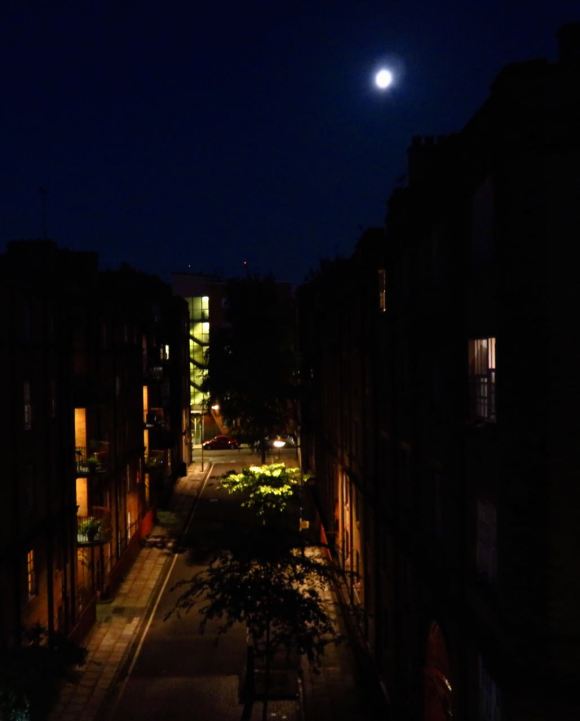 Down in London again, and this is just the first of a double visit this week. Four nights to be spent in the acre of hotels to the south of King’s Cross. A tiny hotel room, but a decent view, of tiny little Midhope Street, and the weather is glorious — you will see more of it tomorrow I’m sure. 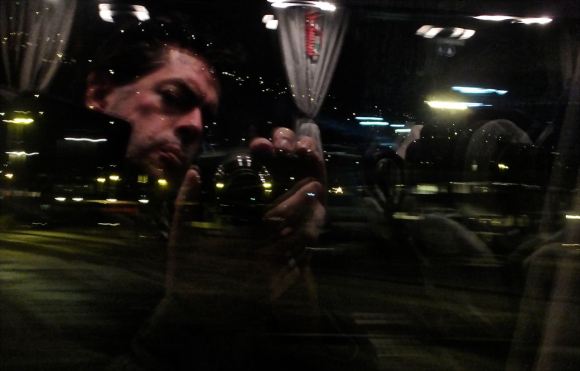 The Flybussen links Bergen city centre with the airport and I’ve become quite familiar with it over the years. Home from Norway this evening, the last trip abroad of 2014. Not a bad shot although it might be nicer if the emergency window-smashing hammer weren’t hovering over things like the sword of Damocles.

The Tiber at night 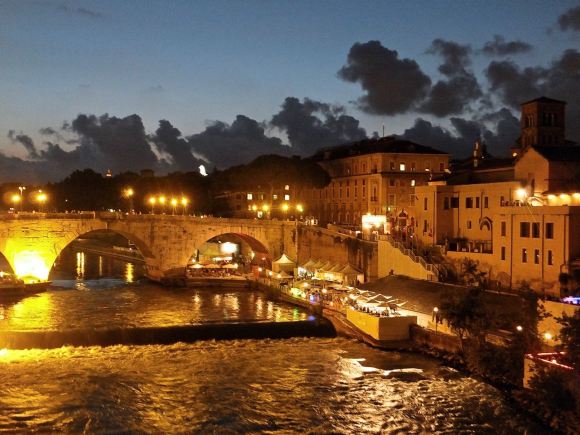 Lots seen today. Visited Ostia Antica, the port of ancient Rome, an extremely extensive site which once again emphasises the sheer scale of the old city. But though I had a couple of candidate photos from there, this one wins; we went to the Trastevere district for an excellent meal and I took this on the way back. What you see here is the island in the centre of the Tiber that is one reason Rome is here, as it makes for an easier crossing point on the river, that then flows through Ostia on its way to the Mediterranean and the rest of the world. 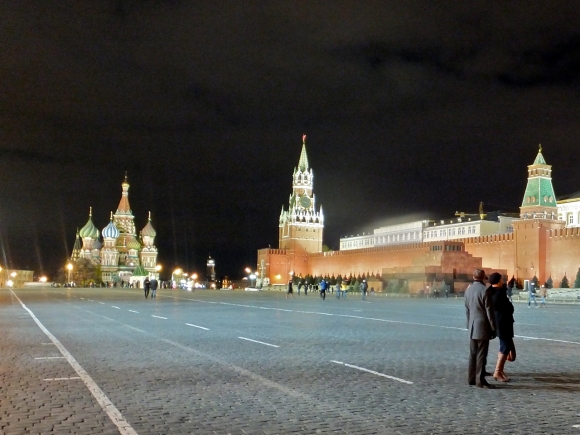 Yes, I’ve been travelling again, lucky me. Although I do intend to have four and a half months at home from mid-November until late March, because I’m getting rather tired of airports and stuff. However, there are compensations, like this, one of the world’s great views, surely. Russia is a vast country but this is its absolute centre. 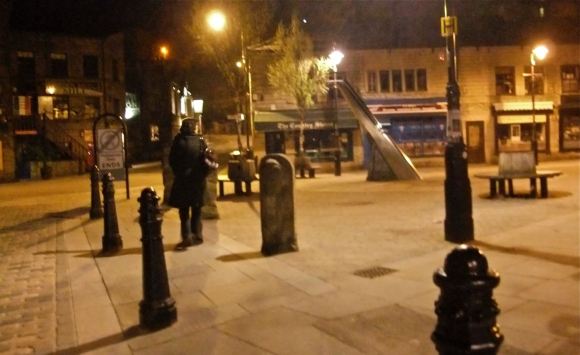 This is the main square in the centre of Hebden Bridge. You have seen it before (like on March 18th and March 6th, for example), but not this late at night. Then again you’ve seen very little of things this late at night, because I am not much of a dirty stop-out. Tonight was an exception: we went to the cinema. 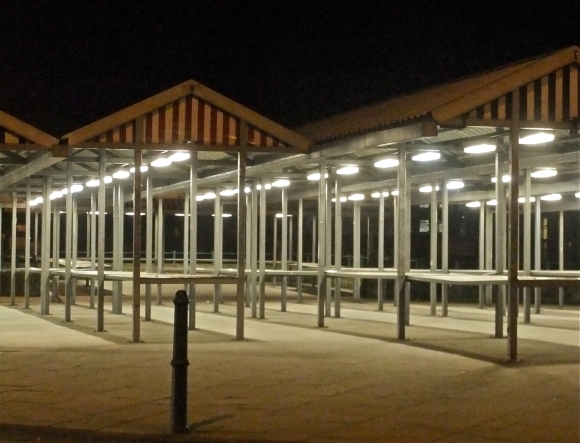 Little commentary to add to this one – just a nice scene I passed on the way home. I’m sure it would be a cheaper service to run if they turned the lights off when it was empty, though.