December, and what endless delights this month is going to offer to us in the UK, beyond even just the usual encroachment of dusk into ever-earlier segments of the day. I did not find a huge amount to inspire me photographically today, but this one will do; the rule of thirds is met well enough. The floodlights illuminate Spotland, the home of Rochdale FC.

2018 doesn’t get off to the greatest start, as our attempt to see a second football match in three days was thwarted by the weather; Accrington Stanley versus Morecambe being abandoned at half-time due to the rain. Although my suspicion is that the referee had a New Year’s hangover and just got pissed off with being drenched so couldn’t be bothered any more. During the half-time-interval-that-wasn’t, it in fact stopped raining. We, however, had paid £55 in total for two adult and one child’s entrance fees, so I make that £1.22/minute to watch some fourth-tier football that is now meaningless. They also suggest we should now pay another £25 to watch the replay. Previous positive feelings I had towards Accrington Stanley FC largely evaporated today.

Watching a game in the sixth tier of English football — the National League North — might seem an unusual way to see in 2017, but Joe, me and 2,509 other people decided it was worth doing today; numbers which help explain the strength of the sport in this country. Halifax Town 2, Darlington 2 was the final score, a good game, quite exciting, though from listening to the home fans around Joe and I you’d think it had been a disaster of Iceland v England proportions. I worry that this shot is a bit messy, but I like the crescent moon visible  to top left, so let’s give it a go. I prefer it to most pictures I get at football matches, anyway, even if it is slightly out-of-focus.

The Contact Theatre was built in 1999 and adjoins the Ellen Wilkinson Building where I work, helping close off my courtyard (you’ve seen that often enough), but it is a separate entity from the university. It focuses on youth theatre and involves young people in programming and hiring decisions, apparently. The picture also demonstrates that we have reached that time of year where I get to leave the office and it’s already dark. So be it… December it is.

View from my hotel room, Moscow 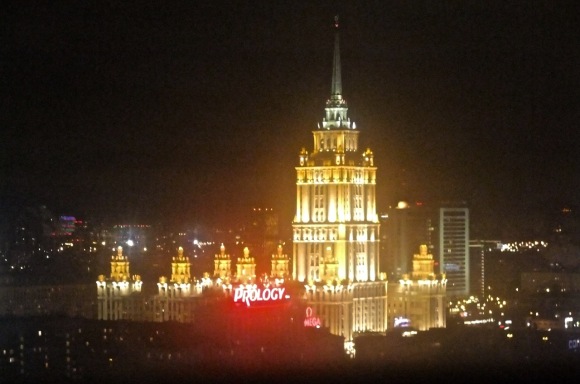 Looking out over the Moscow River (unseen in this shot) – this is the Hotel Ukrainia, one of the ‘Seven Sisters’, gothic skyscrapers built by Stalin (well, not personally) in the 40s and 50s. I’m in the Hotel Belgrad.

I always wanted a job where I could travel, right from being 16 or so. And now I have one, I’m glad enough, even if sometimes it seems a little excessive – I have 7 work trips abroad planned between now and mid-February (plus one personal one), and that does not even include trips within the UK.

But I think the chance to see how other cultures live, and realise that – unlike what the Daily Mail says, in its xenophobic little hate-fuelled way – Britain is not the centre of the world, are good things and has made me a better person, though others should be the real judge of that. Do I worry about the environmental impact? Yes… but I don’t own a car, so feel at least that I compensate in one way. Again, let others judge.