I first met Mariam at the i3 conference in Aberdeen in June 2015. She is Tunisian by birth, but at the time was studying in Japan, so the second time we met was when she served as my guide round Tokyo on a (very wet and cold) day in March 2017. And as she has recently moved to Australia, I met her in Melbourne this April; it was her I was waiting for ‘under the clocks‘ — though that picture is of someone else, which also indicates that despite these different meetings each on different continents, this friend has yet to appear on the blog herself.

Let’s rectify that. Mariam speaks seven languages by the way and is a living example of why internationalism is the way to go. It was great today to finally introduce her to the home town.

Andrea in his office 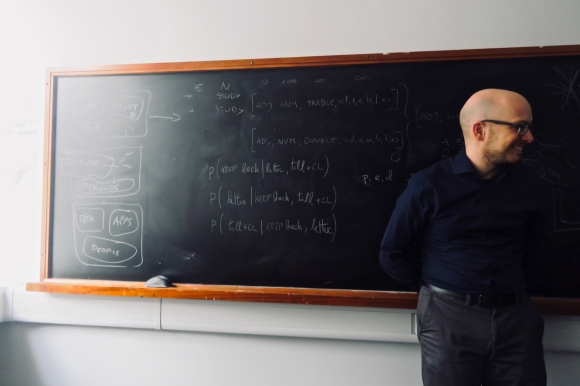 I don’t often do work colleagues in their natural habitat but Andrea (who is Italian, so presents his name like that) made a fetching scene in front of a blackboard filled with stuff that I don’t really understand. I was a learner for an hour today.

My Manchester colleague Lee skulks around the Uni of Melbourne’s underground car park waiting to be picked up. So to speak. Melbourne’s seventh shot in a row, and there’ll be a few more yet: a period of stability, place-wise, after a long run of moving around — the period 8th March to 4th April featured 21 different places.

I wanted this week to get at least one of our Melburnian colleagues onto the blog and seeing as Linda has already made it — albeit a few months ago, in Manchester — here is Camille. But it would have been wrong, today at least, to depict her without daughter Gabby, who as she is on her Easter break from school, was obliged to join us today: but very welcome she was, including to the post-work drink at the Charles Hotel.

Night out with C & G

There was the chance of a Hebden Bridge picture this morning, but it didn’t come to pass, which means the one last Monday was the last for a month; I’m off on a substantial trip. The first stage of this was to go to London and have a Friday night out with (amongst others) these two lovely people, the wife and George, making her third appearance on the blog…. a good evening was had, for sure….

Doug visits Hebden Bridge and thus provides an opportunity to get him on the blog for, I think, the fourth time. As usual he wears fewer clothes than any other person would in similar grim weather. Then again he does have a certain amount of natural insulation. Good to see him — as it always is…

Linda points something out

My working week has been busy but interesting thanks to the presence of two colleagues from the University of Melbourne, in Australia, Linda and Camille. I should depict at least one of them on the blog at some point, so here is Linda doing her stuff at a lecture this evening. It’s been nice to have them here, not least because in early April next year the reciprocal part of the exchange takes place and I (along with my colleague Lee) get the chance to go Down Under for a couple of weeks — with all its associated photo opportunities… 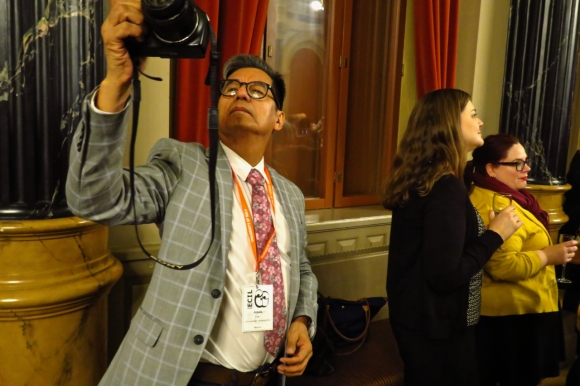 Where there is a conference, then there will be a conference reception, usually held in whatever local municipal building is considered most convenient: here, Oulu City Hall. It had a ceiling considered worthy of documenting by my fellow delegate Jesús — who comes from Mexico, the sort of place where they name their men Jesús, a name I have always thought must be something to live up to. 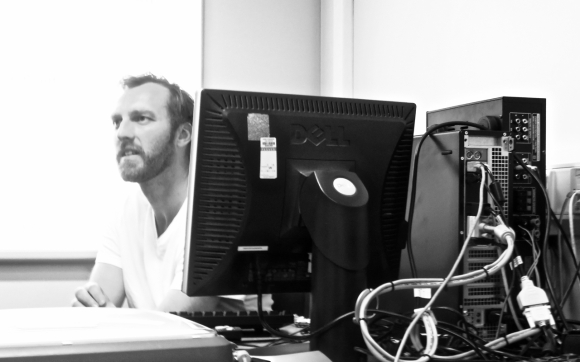 Jonny handles e-learning technology for our little band of teachers. I am happy with this portrait of him, man in his context and all that. Though aren’t desktops starting to look rather retro these days? All those wires. How 1990s. 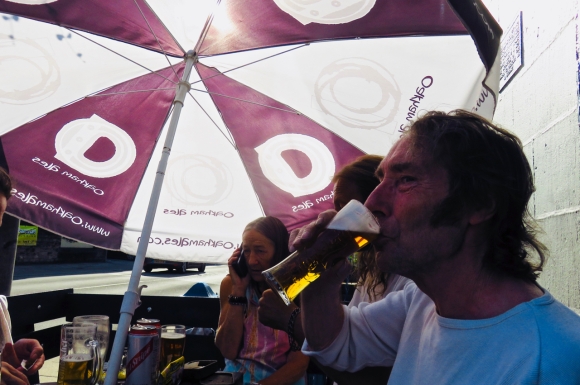 The sun shows no signs of going away, so rather than wonder when the hosepipe bans and drought orders will come in, let’s just enjoy it — albeit, under cover. Too hot to sit out in direct sunlight for long, even with a beer. Mr John Bailey makes at least his third appearance on the blog.