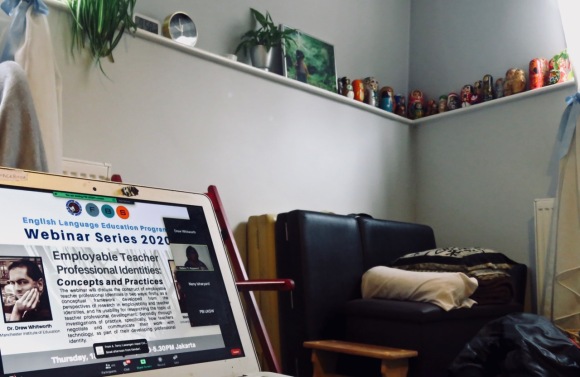 My last picture taken outside England was captured on February 2nd, 137 days ago in Bucharest. That span of time isn’t all that long, I know, but it is nevertheless now the longest period I have spent only in England since I started doing this blog: and I guess it is due to go on for a little while yet.

The nice people who put me up in Indonesia in November (UKSW in Salatiga) did want to hear from me again however, hence the webinar I did this morning — to an audience of 500+, according to the counter of ‘Participants’ at the bottom of the Zoom screen. I, on the other hand, just talked to a computer screen, as I have been doing for the last three months. Like the Premier League footballers who restarted their well-paid activities last night, I made do with a bunch of artificial ‘fans in the stand’, namely Clare’s Russian doll collection.

137 more days from now takes us until the end of October; will sanity have returned to the world by then? I’m not taking bets on it.