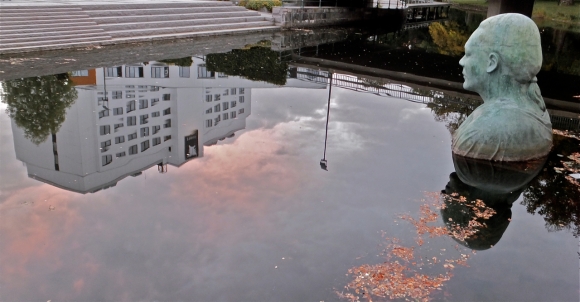 Well, here I am in another new country for me – Sweden. I won’t see much of it, being here for under 48 hours all told, and just in this one small city, Borås, which is in the south of the country, not far from Gothenburg. Its claims to fame, so I can tell or have been told, are that — it is the home of the country’s most prestigious Library and Information Science School (this is why I’m here); is the textile capital of Sweden; it is the home of IF Elfsborg, football champions of Sweden in 2012; and it has a lot of sculpture, including this rather tasteful piece of work not far from the bus station, known, apparently, as ‘Bodhi’ (meditator). As of yet however, I have failed to find any particularly good beer here. Which is also worth noting.

Leave a Reply to Norra Hamnagatan, Gothenburg | Being 42 Cancel reply