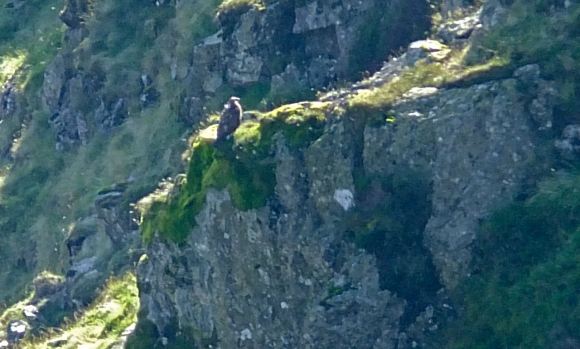 I went on a walk today – the fifth-to-last one in my project to walk all the 214 ‘Wainwright’ fells in the English Lake District – and you can read about that on my other blog, and see many photos that are a lot better quality than this shoddy, out-of-focus shot. (Give me a couple of hours and I’ll have them up later today.) So why is this crappy picture the ‘Photo of the Day’, then?

Because this is a golden eagle goddammit. There are two – two – golden eagles in the whole of England. Scotland has quite a few – at least, if farmers and landowners can be exhorted to stop poisoning them (a disgusting example of environmental carnage, which the RSPB have long been campaigning against) – but England has just one breeding pair, who reside in Riggindale. This is a valley at the southern end of the reservoir of Haweswater, in the east of the district.

I was within a mile of that valley today, above the deep and remote coombe of Threshthwaite Cove, near the summit of Caudale Moor (fell #205). I saw this large bird fly through the cove and swoop up onto a promontory. I didn’t think, at first, what it might be, but I’d seen where it landed and saw that the rocky promontory was being touched very well by the sunlight, so I stopped for a few minutes to see if I could capture it. The more I took of it the more I thought, hang on, this is far too big to be a hawk or even a falcon. This picture above was my best effort, as it really was quite a way away and even at maximum (70x) zoom this is as good as it got. But I got enough other pictures, including of its face, to be very sure that what I saw and photographed here is, indeed, quite literally, the rarest bird in England.

I once knew someone who was completely inept at golf, a total novice, but who once flukily hit a hole-in-one, witnessed by many people. Seve Ballesteros went his whole career without hitting one. I feel like I may have done the birdwatching equivalent here. Sorry to anyone who has been twitching for decades and never got one like this, then. But now, at least, you know roughly where to find it.